In which Wildbook did the issue occur? Manta Matcher

What is your role on the site? (admin, researcher, etc) Admin

What happened? A feature region was added incorrectly, so the researcher deleted that feature region to create a new one. The new feature region only showed up as one that was matchable with the old inactivated Chris Town algorithm. We couldn’t run a search with Hotspotter or PIE. This happened once before, but in that case they deleted the other encounter and reuploaded. There seems to be an issue with creating subsequent feature regions.

You can see that the new feature region isn’t matchable with the newer algorithms in the screenshot below. 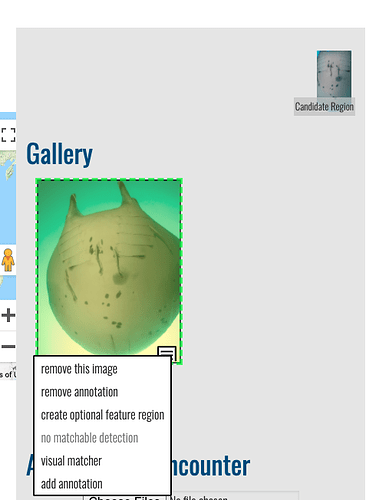 What did you expect to happen? To be able to create and match from a new feature region without having to delete and reupload an entire encounter.

What are some steps we could take to reproduce the issue? Try to create a matchable feature region with this encounter: MantaMatcher

I just tried the links you provided and I am being taken to an encounter search form. Can you double check the links @AFlam ?

Not sure what happened, but I’m able to get there with the encounter number you provided. Thanks! We’ll get looking at this

Hi @AFlam!
I was able to navigate to encounter 692a2709-1ece-4064-9dde-18662202f920 with MantaMatcher, but it looks like a different image from the one in your screenshot above (see my screenshot). In fact, it looks like the manta where the feature gets rotated 180 degrees from your other community post.
Go fish (get it?)?
-Mark 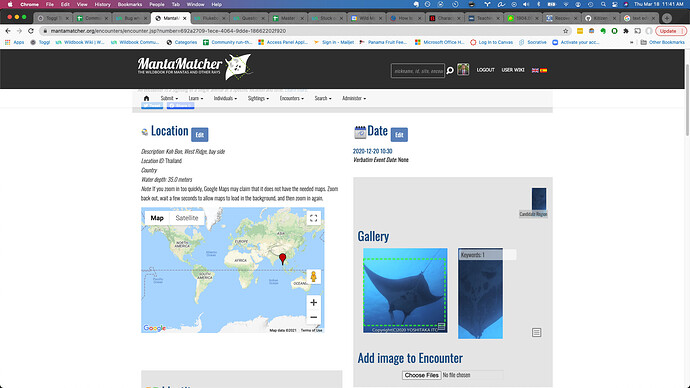 Hi, @AFlam !
Just reaching out to see whether this is still an issue.

Hi! Sorry for the late response. Yes, it looks like I’ve put in the other encounter we had an issue with. I think the original encounter on this might have been deleted and reuploaded by a research assistant so she could make the match.

I just tested this on the other Thai birostris (not the original Mozambique alfredi), and it seems it’s still an issue. When I deleted the existing feature region, then made a new one, it only appeared as matchable by the old Chris Town algorithm, and there’s no option to match with Hotspotter or PIE.

So it seems it’s still an issue. We don’t delete feature regions a lot (most often when training new people), so it’s not a HUGE issue, but it’s definitely a little hassle if we need to reupload an entire encounter if we just want to create an updated feature region.

I think I understand the problem now and agree with your assessment that it’s a bug created upon deletion of a candidate region.

We’re tracking the ticket internally as WB-1585. Thanks for finding it.

You’re already well aware of the (tedious if workable) workaround in the meantime.

We are having a similar issue with the Florida mantas, we are unable to access the Hostpotter or PIE algorithms.

Ola! I’ve encountered another manta with bugs around the candidate region, and I figured I’d drop it here rather than starting a new report, because this feels connected.

I tried to set a candidate region (for the first time as far as I can tell). I got an error:

But the little candidate region appeared (a little box next to the photos, like it used to with the old Algorithm), but not a new larger photo that I would use to match with Hotspotter or PIE. 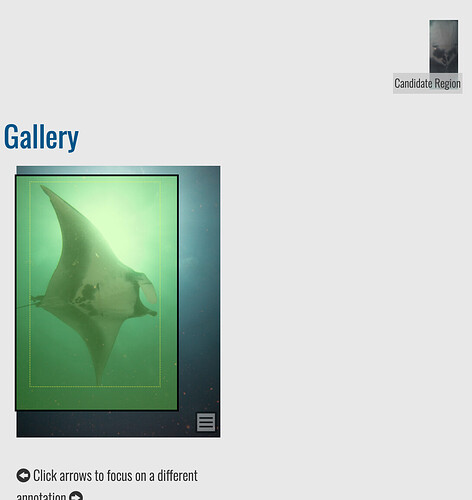 So I can’t match this manta, and I can’t figure out how to get a working candidate region set up (short of deleting and reuploading)

As a result, I similarly cannot use Hotspotter to find matches. 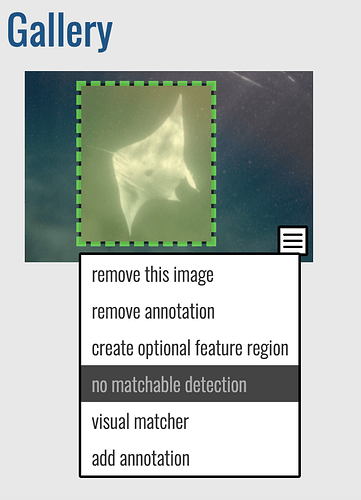 @FLManta we’re on it! Resolving some of this it my plan for today and tomorrow!
-Mark

Hello, @AFlam and @FLManta !
I believe that I have resolved bug with the “Error: I was unable to execute the action” issue. I was able to run hotspotter and PIE on a manual annotation.
There do still seem to be some issues with deleting candidate regions, so I’m leaving this thread open because there is more work to be done, but hopefully this unblocks you to some extent in the meantime?
Many thanks,
Mark

Thanks @MarkF! I was successfully able to create a candidate region and that bug does seems to be solved. I was still unable to “start match” to run Hotspotter or PIE algorithms. I’ve tried this by editing a previously uploaded encounter and with a new upload, but still run into the same issue. 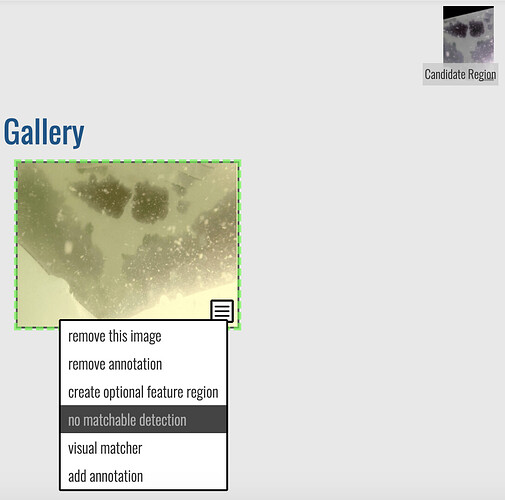 Hi, @FLManta !
Thanks for that. In the meantime, is it possible for you to create a manual annotation and then run matching on that?
Cheers,
Mark

Yes I’ve been using the visual matcher or manually adding to existing individual. We match our mantas within our own database before adding to MM anyways, but would love to be able to use the algorithm as a second method.

@MarkF we seem to have lost all ability to match anything with Hotspotter or PIE. I just had an email from @AMKW re a manta in the Maldives: MantaMatcher

There’s no option to start a match. You’re only seeing the old tiny candidate region photo, not the newer one with a menu that allows us to start the match: 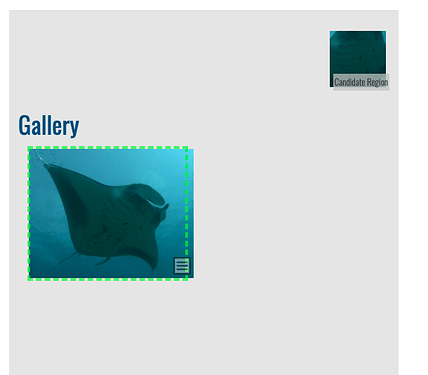 I tried the workaround that was working earlier (so did Anne-Marie), and when we separately re-uploaded the photo (MantaMatcher), there still wasn’t an option to start a match, so it seems the issue has grown.

Hi, @AFlam !
Thanks for reporting this. I’ve updated the WB-1585 ticket to reflect the escalation.
-Mark

We have deployed a new fix, which should:

Can you please try out your examples above and others and let us know if the situation is resolved?

I’ve just checked and it all seems to be working as it should now. Thank you!