Issue 1: My question here is, should a “down” be able to be matched with a left and/or right?

Issue 2:
Interestingly, these 2 annotations come from the same sighting although not the same media asset. But the dog in the target encounter is also present in the media asset for the encounter in match#3. So when I go to that match result’s encounter record (http://www.africancarnivore.wildbook.org/encounters/encounter.jsp?number=388e450b-5d35-4e20-98c2-48742beb78fc) and I hover over the annotation for the same animal that’s in the target image, I get two different viewpoints for the same annotation (“down” in black font, “right” in green font): 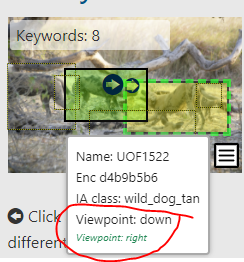 Another animal in that same media asset also has 2 different viewpoints listed - down + left: 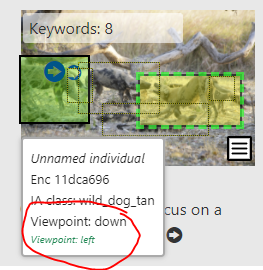 But when I click the arrows to open that encounter (http://www.africancarnivore.wildbook.org/encounters/encounter.jsp?number=da32fde7-97f3-44cc-8b77-879111dca696), and then hover over it in the gallery, here it shows left + left viewpoints - for the same annotation" 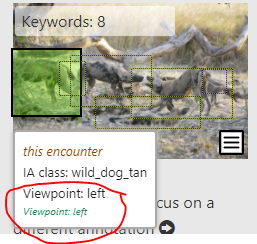 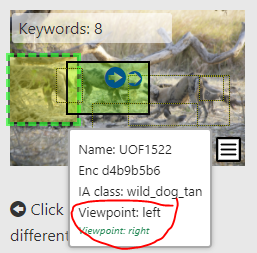 And the annotation belonging to match #3 is showing viewpoints of left + down now: 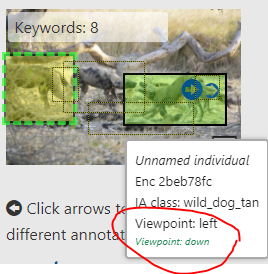 Back on the original match results page, matches #4, 7, 8 & 9 are all left viewpoints being matched to the target which is a left viewpoint. It’s hard for me to tell what the actual viewpoints are for each of these match results because they also change depending on which encounter record from the same media asset I’m using to check the viewpoints.

What did you expect to happen?
I expected that the viewpoints assigned to annotations within a single media asset remain the same no matter which encounter gallery I’m viewing to hover over each annotation and see viewpoint.

Can someone explain why this is happening?

I read two issues in this ticket. Apologies if I missed any.

Issue 1: My question here is, should a “down” be able to be matched with a left and/or right?

That I am not sure about. When I re-run the match, I see the expected only-right-side potential matches:

But the match-against set is different in size than the example you provided, so I’m not matching the original query exactly. Do you know which locations were selected in the User’s match? It seems to be more than just the default “Africa - South” in the results.

Issue 2: rolling over other annotations in an image shows conflicting annotations.

This should end up displaying only the one viewpoint, and it will be the viewpoint of the annotation actually under the mouse.

This fix will be deployed in your next upgrade.