What happened?
Reported to me by a researcher & replicated by me.

What did you expect to happen?
That the annotation I selected in the encounter record to view match results for, is the one I see as the target image in the match results and also the one named in the yellow bar at the top.

What are some steps we could take to reproduce the issue? Per above

I am seeing the behavior as designed here. When you submit/import an Encounter, by design all found annotations from photos are combined into a single, consolidated matching task, even if we split one of the Annotations off later due to multiple detected annotations in an Encounter. This consolidated task is then attached to all related annotations (e.g., click "match results:). This gives you a single view into everything that was found and what each potentially matched. However, if you click “Start match” on a single Annotation after that, you will get the expected single-annotation match results attached to that annotation thereafter. Please let me know if subsequent matching has more than one annotation in the results.

Splitting the ID tasks with the annotations and Encounters is a good idea…it’s a clean line too…but it also means that the full context of matching an new Encounter will be lost (or at least split into multiple locations). It will also require a new UI to track the split from one ID job into two ID jobs (e.g., how does the user know that they need there are now two ID jobs they need to review?).

I believe our Next Generation of Wildbook will be handling more complex use cases like this.

So I just ran Start another match on the same encounter record: https://africancarnivore.wildbook.org/encounters/encounter.jsp?number=ad45b230-5cea-4d73-9dc9-da63594630b3
And I got 2 sets of match results for the same annotation but with a 10sec time stamp difference:
Wildbook for Carnivores

Interesting. I only received the one expected.

For both of us though, only the one, correct annotation is shown as expected.

Here’s a screenshot of my results page: 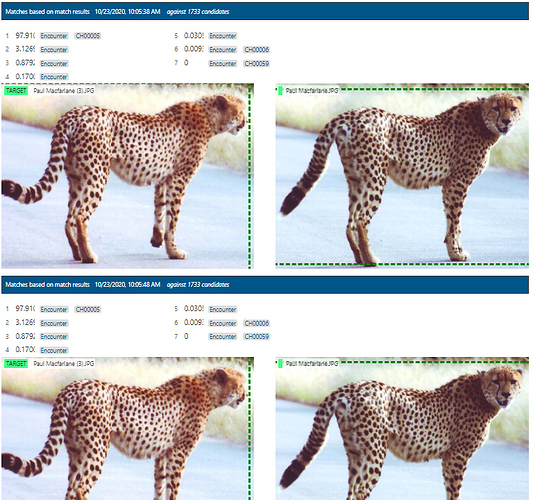 Due to upcoming reset of matching, marking as resolved.

@tanyastere - I thought the reset on matching was only going to affect the one species?

Right, sorry. I for some reason thought this was a wild dogs ticket. Going too fast I think.

The investigation that was done came back with the following:

it looks like one set of results to me

Have there been any additional cases of this happening? Are you still seeing the issue?

I haven’t had any additional reports of this from Jeanette. I just viewed a couple of example encounters, including the original one that was reported above and the issue is not recurring. I’d say this can be marked as resolved and if we run into it again, I’ll put in a new report.