In which Wildbook did the issue occur?
Whiskerbook

I’m coordinating the zoo test and so there are 16 people testing the system out. These are some of our most frequent bugs so far. 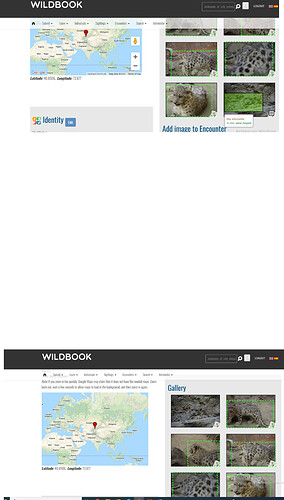 What are some steps we could take to reproduce the issue?
It seems the detection algorithm issue creating an extra annotation leading to a blank encounter page with no image is not widespread although two volunteers reported at least once this happened to them, so it really is a bug.

#2 and #3 look like the same known issue: manually created annotations don’t display the viewpoint on rollover. Every time we have checked this, the viewpoints are correctly stored in the database, and this ends up being a caching issue (database not browser) that later resolves. I believe the viewpoints are there and will be used for matching (we haven’t seen an example where they were not stored), but I would need a direct link to confirm.

#1 I need a direct link to the Encounter to dig further. I am a bit worried that your use case of users with duplicate data may expose more of those. Wildbook does some de-deduplication of Annotations when they come back from detection and this may be an artifact of multiple users uploading identical data and then being at various curation states with it, which is not a supported use case of Wildbook. To workaround this, each user’s data (specifically their photos) may need to be slightly altered (even 1 pixle differences avoid deduplication) to essentially fool Wildbook into allowing duplication, otherwise we may see more of this. That’s just a hypothesis until I get a link to this specific Encounter.

Okay great, thanks for the update. I will report back to the team.

Also for #1, I have done the watermarking to avoid de-duplicates and it seems to have worked for the most part. I no longer have seen the same errors in the Hotspotter or PIE results interfaces, so the deduplication worked.

I will ask around again to the team to see if anyone encounters this that they send me a URL for this.