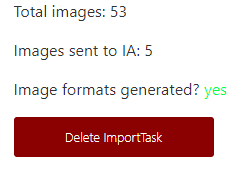 Is it possible this issue is related to an earlier issue I reported with another bulk import missing all annotations? Here’s the link to that bug report: Missing detections on an upload batch where detection was run

It looks like those were imported on 9/30/2020, so I’m not sure what may have happened back then to prevent their successful detection. I just reissued them to detection and now see 53/53 having been sent to IA.

Results from detection should be done in a few minutes.

That’s terrific, thanks so much @jason. but I didn’t intend to have anyone work on the weekend, so my apologies. Please go back to your life!