What Wildbook are you working in?
Amphibian and Reptile Wildbook

What is the entire URL out of the browser, exactly where the error occurred?

Can you describe what the issue is you’re experiencing?
Hi,
when I imported 1499 photos in bulk and added them to the project “Uni Bielefeld - Adults Kottenforst”, some encounters were also added to other projects in the ARW such as “B. Variegata Norther Hills Recapturs”. I wanted to remove the bulk import logs and import tasks. However, now most of the "Uni Bielefeld - " projects are gone? I have not clicked on delete in any project, just in the bulk import log.

If this is a bulk import report, send the spreadsheet to services@wildme.org with the email subject line matching your bug report
Done.

I did a database restart this morning as it looks like the database was in a locked state. I see the site functioning normally now. You should likely retry your tests.

However, now most of the "Uni Bielefeld - " projects are gone?

I see many of these projects.

As an admin you should be able to see them in the project list. I’m hoping the database restart has restored this view for you.

when I imported 1499 photos in bulk and added them to the project “Uni Bielefeld - Adults Kottenforst”, some encounters were also added to other projects in the ARW such as “B. Variegata Norther Hills Recapturs”.

Can you please provide example links to these?

I also noticed that photos by Paul.Bachhausen were added to many different projects- likely the same error?

Can you please provide example links to these?

Hi @jason ,
thank you, the projects have been restored for me!

Hi @jason ,
I have started a new bulk import of the photos and added 1499 encounters to the project “Project: Uni Bielefeld - Adults Kottenforst”

I wonder if this has something to do with the IA that was running over night? Is there a fast way to remove my inadvertently added photos from all the other projects but “Project: Uni Bielefeld - Adults Kottenforst”?

Hi @jason ,
I have removed the encounters from the other projects in order to not confuse anyone.
I’ve had a look at the meta-data of bulk import log and it seems the 20 encounters added to all projects were clones from other encounters without annotation: 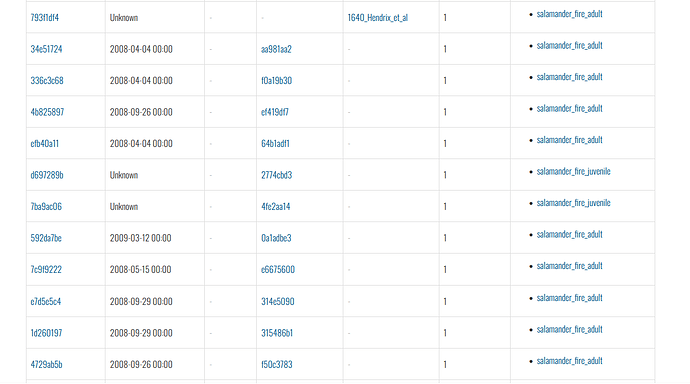 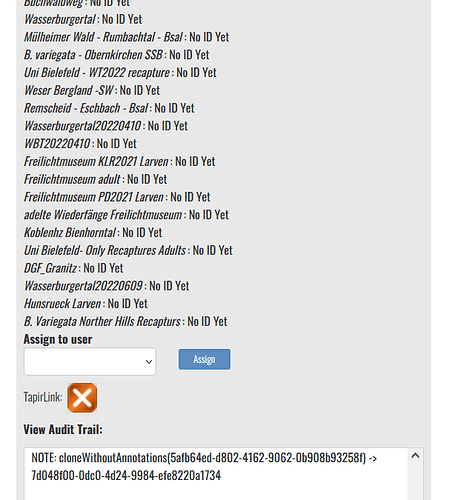 I wonder why and how that happened?

When two animals are found in an image (or the detector thinks it finds more than one animal, hence two bounding box annotations are created), the Encounter is cloned to another encounter, and each new encounter holds only one annotation. Thus the definition of an Encounter (one animal at a point in time) is preserved, and each cloned Encounter should hold one of the multiple annotations. If during that cloning process the original Encounter is part of a project, the cloned Encounter and annotation should be too.

However, I just found a bug in our cloning code for the project (new change) that puts the clone ina ll projects. Yuck.

I have deployed to fix to your Wildbook. Please let me know if you see this again.

Thanks Jason! I will report any issues if I encounter any.

I could manually delete this encounters as they were added to the same project as the originals.

Cool. Those 20 clones being is the one project is the system as designed. The clones occur when multiple annotations occur in a single image, forcing the system to clone Encounters to satisfy the definition of Encounter of “one animal at a point in time and location”. Those 20 encounters should only be deleted if they truly do not have annotations of animals in them.