What is the entire URL out of the browser, exactly where the error occurred?
Upload validation screen - after spreadsheet upload & before “submit” batch

Can you describe what the issue is you’re experiencing?
A user was trying to process a bulk import and isn’t seeing anything on the upload validation screen other than the instructions/legend at the top of the page: 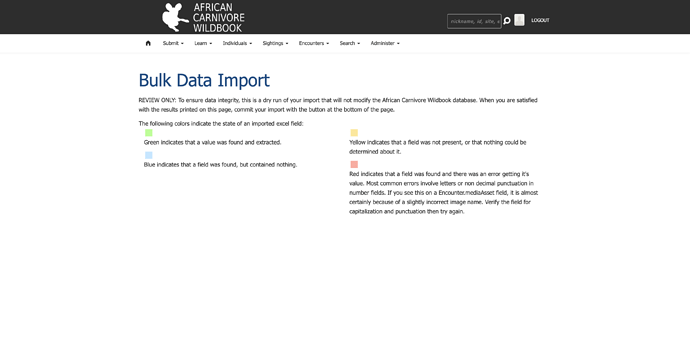 He uploaded a folder of images and then selected the .xlsx file and clicked “begin upload”. He got the screen as shown in screenshot above but nothing else showed after ~10mins. We were screensharing at the time so I saw what he was seeing. He tried to upload the file again and got the same result.

This happened between around 9am PT to 9:45am PT today.

I’ll send the import spreadsheet to your email.

We haven’t done any work on the server recently, though we do have some upgrades related to bulk import we would like to merge to ACW. Please let us know a good time for that.

Separately, I tried loading in the spreadsheet in Google Chrome on Windows, and I had no issues previewing the data, except of course I don’t have the photos. Note: I blurred the GPS and date for security. 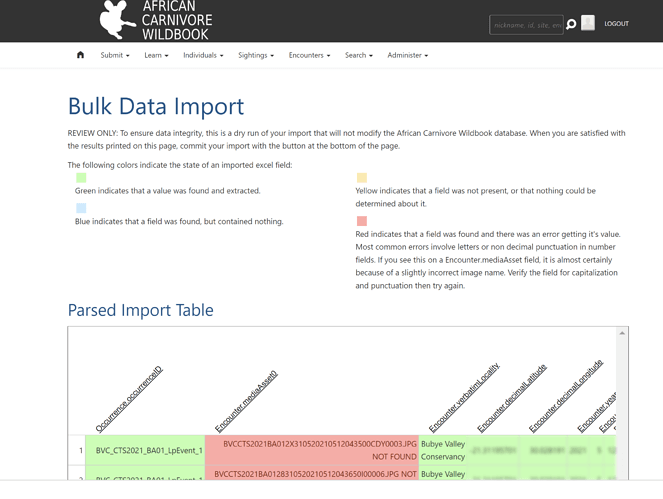 Are you able to try the upload yourself?

I tried loading in the spreadsheet in Google Chrome on Windows, and I had no issues previewing the data, except of course I don’t have the photos. Note: I blurred the

That was my plan. I’ll also do a comparison of the file names in the image folder that was uploaded alongside the names in the Encounter.mediaAsset0 column of the upload file since it appears that’s a problem too.

Is there a problem with using a Mac to do bulk imports that you know of? The user was using the following setup: Safari browser 14.0.1 on a Macbook Pro running OS version 11.0.1.

Hi @jason - I was able to successfully upload the spreadsheet for this bulk import which is great.

I know that Macs and the latest Safari browser are supported so I’m thinking if the problem wasn’t caused by his system, and it wasn’t caused by a server interruption or issue of some kind, it was probably his internet connection? He’s in London, England but everyone can have internet issues… Would you guess the same?

I would guess the same and was having interruptions in Portland yesterday myself.