What Wildbook are you working in? Leopard Shark

What is the entire URL out of the browser, exactly where the error occurred? Wildbook for Leopard Sharks | Login

Can you describe what the issue is you’re experiencing? When I go to add to an existing individual, in this case LSBB-123 it doesn’t give me the option. Happening with a lot of sharks! Just random numbers sometimes - see attached pic. 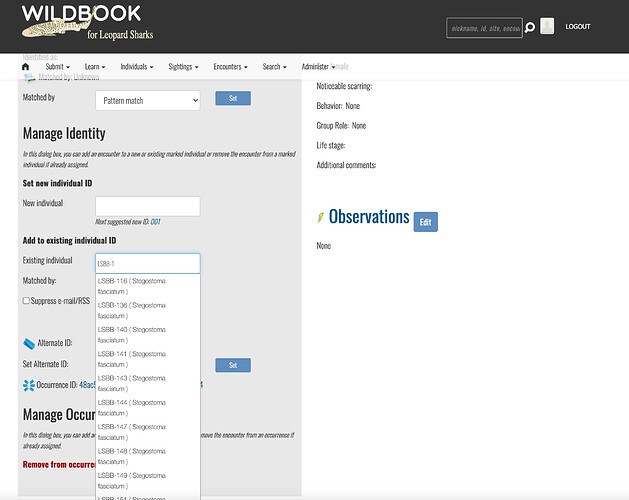 Hi, @drobinson !
We’re planning on deploying some updates to leopard shark next week, and I’ll take a look at this at that point. Thanks for bringing it to our attention!
-Mark

I’ve updated leopard shark and also noticed that you were able to assign the ID LSBB-123 to Wildbook for Leopard Sharks | Login, so I’m marking this as resolved.

If you have any advice for the next community member who has a problem like this, please post herein!
Thanks,
Mark

NO! This isn’t resolved. The problem still stands!! How can you mark this as resolved?

If you go into the link I sent, remove the ID from the shark and try to add the shark as an EXISTING LSBB-123 it is not possible as with many other sharks.

Can you mark this as unresolved or do I have to start the whole process again?

Hi, @drobinson !
No worries. I’ll change the status of this and investigate further.
Thanks for the quick response!

Hi, @drobinson !
It looks like that encounter is Stegostoma fasciatum, while LSBB-123 is Stegostoma tigrinum.
I think that if you change the species to match, you will be able to see that individual in the autocomplete. Can I ask you to confirm?
Thanks,
Mark

Hi Mark (I have sent the images via email)

So if some have been changed to tigrinum (which I didn’t do) and others are fasciatum, they won’t match up? Is there any way to change this as it will be causing chaos and may be why our matches are also out.

Either we need to change all to tigrinum and get rid of fasciatum or have them both work in harmony with each other.

When was this changed? Please see the attached photos, I am unable to add tigrinum when making entries (only fasciatum is an option) and I am unable to change or edit the latin name in wildbook! So I’m stuck!

Hi, @drobinson !
I saw that you were the managing researcher for all three encounters associated with individual LSBB-123, so I went to each of those encounters and changed the species designation (species is editable from the encounter pages, provided that the species are on the list) to fasciatum.

After the encounters were changed, I was able to add the new encounter to LSBB-123. 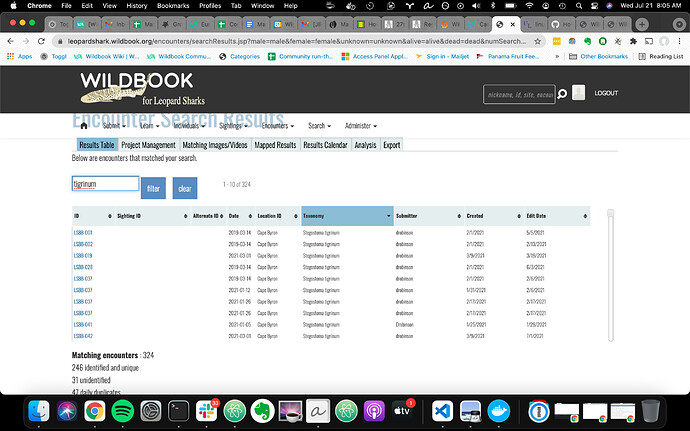 I plan on asking around at the WildMe folks this week to see if anyone is familiar with why Stegostoma tigrinum might be in this wildbook at all.

I should be able to change those species designations in bulk for you if you’d like, but I’d like to do some more research before I do that.

In any case, the current encounter attachment issue should be fixed.

It’s definitely a feature rather than a bug that one cannot attach an encounter with one species designation to an individual with a different species designation; I believe that this feature has been in place for a very long time.

I hope that this makes sense! Can you think of any way that so many of those encounters are Stegostoma tigrinum rather than fasciatum?
-Mark