What Wildbook are you working in: GiraffeSpotter

Can you describe what the issue is you’re experiencing?

When using multiple media assets per encounter (i.e. Encounter.mediaAsset0, …1, …2, …3, etc.), the bulk import upload is only importing a few of the columns. Is there a limit to the number of these columns or is there something else going on?

I am bulk importing both the images and the metadata excel file on GiraffeSpotter, and it is in this process (at the last step before final confirmation) that I am getting the screen in the image below. I will also send the spreadsheet in question to support@wildme.org.
Thank you for your help!
-Connor Parks 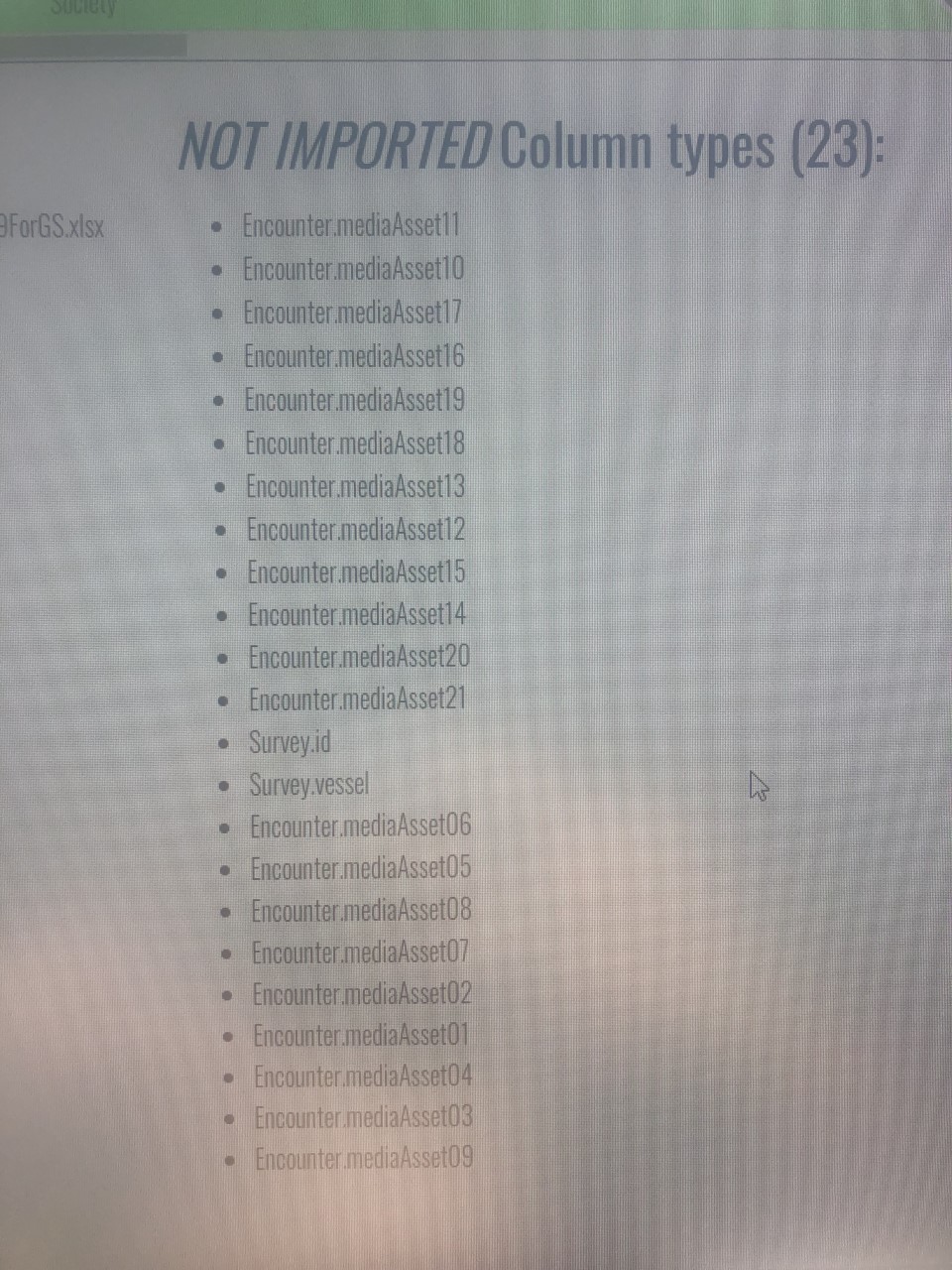 I’ve got some information on this for you. The media asset columns do not need the leading zero for single digit numbers. Encounter.mediaAsset02 should actually be Encounter.mediaAsset2. If there is a broken column header earlier in a sequence, it can also break others.

This will solve some of your problem. The other part, survey columns, needs more investigation. I’ve spent some time on this and not found an explanation so have created issue ticket WB-1750 which we use to internally track bugs.

I’m not sure if these Survey columns are used commonly on this platform, but they are rarely used on others. I’d suggest picking an alternative like Encounter.researcherComments and continuing to work while we sort that out if thats something feasible for you to do.

Hope this helps, thanks.

Hey! Thank you for the response. The format you were mentioning is actually the first way I tried it and still ran into this issue. I changed it in hopes of fixing that problem to no luck, which is shown in the screenshot above. Any ideas? I will try it again based off your suggestions but I don’t know if that will fully do the trick. With the survey vessel and ID I’ve found it works now if it is one string without the underscore spacing, and have that part settled now.

Thanks for the additional information. The Survey fields rejecting underscores is still an issue and I’ll update our issue ticket.

Please do try the media assets with the original format. It’s interesting that it failed before, perhaps one issue caused each other.

When I modified your sheet and did a trial import the media asset columns were all found. Keep me updated!

I modified each encounter to have less images by picking ones that best represented the overall encounter and the upload worked this time. However, it is now not being sent to the AI. Let me know if there’s any other information I can provide you with!

I’ve re-run the import through detection and can see results coming through. There were a few images in which some animals were not found however. These seem to be infrared camera trap images.

I’ve checked with the crew, and we don’t think the training data for the giraffe detector included any images like this. Since it’s not trained on them, it might recognize some characteristics and make a successful detection, but it might miss some.

It’s also unlikely there is enough patterning information for these to produce a successful identification. If you want to manually create an annotation box and try anyway, there is a menu option for ‘add annotation’ in the lower right corner of each image on the encounter page.