I just merged 2 individuals into a single individual and noticed a new ‘name’ field called “merged”, that is blank: 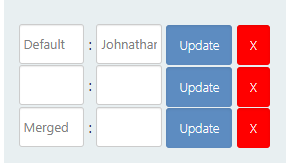 Can someone explain to me what that field is intended for?

Merged is related to the projects framework. If you discover you have two individuals that need to be merged, and each individual has a project ID, you need to select the one that becomes the main ID. But we wanted users to be able to keep a record of the previous assignment as well.

This is a minor bug because it shouldn’t be showing up blank. We’ll get it cleaned up under WB-1456, but it seems pretty minor.

I would like to escalate this issue as we are running into a large volume of merge requirements with our African wild dog census data (we have approx 680 Sightings to process) and it would really help if we could rely on the merge function to populate these fields directly. Part of the issue is we have two catalogs being merged and we do not want to lose the traceability between the two.

Hi, @PaulK !
I just got very minor feedback on WB-1456 today. This means that the functionality should be in place very soon!
Thanks,
Mark

I appreciate the feedback. If you need anything for testing on this please let me know.

@PaulK and @ACWadmin1 ,
Tanya is out for the week. After I get this ticket to pass code review, can I go ahead and deploy it on ACW and recruit you guys to test it?
-M

@MarkF - absolutely! thanks so much!!!

@ACWadmin1 and @PaulK !
It has been deployed and looks ok upon cursory inspection. Please let me know if you see anything weird!
Thanks,
Mark

Hi @MarkF - we haven’t got a new merge to test this on yet but I was just looking at a previous merge and found some changes I’m not sure were intentional? Max the leopard (ID: NaLe0019_CCF) was merged awhile back with NaLe0087. At that time the new “Merged” name category appeared but the field wasn’t auto-populated, thus the bug report - so we were instructing users to manually populate that field post-merge: 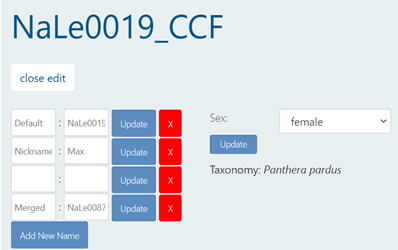 Post bug fix, the other, non-default name categories seem to all have been blended into the nickname field: 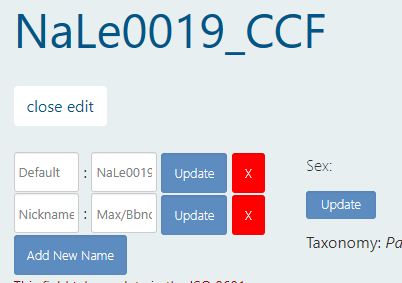 This is not what we were expecting. It makes it hard to understand whether or not there was a merge and what the merge was. Is there a way to go back to having the multiple, separate name categories and fields, including the “merged” field?

Hi, @ACWadmin1 !
That is super weird!
I’ll take a look at that individual in my test environment and troubleshoot some more, and I’ll restore ACW to what it was (is now an ok time to do that??).
Incidentally, @colin is this behavior you might expect (see post directly above with concatenated nickname)?

@MarkF - now is fine but it’s cocktail hour at my house, not sure about you…

@ACWadmin1 !
Haha! This will be my last task for the day. I was hoping you weren’t on CAT…
-M

Ok, @ACWadmin1 !
I restored to the snapshot of ACW before the most recent update.
Looking at Wildbook for Carnivores, I’m seeing the “merged” field now, but I’m still seeing the concatenated nicknames. I suspect that this means that this changed before the update?

I’ll bring this to folks’ attention tomorrow. We’re a bit of a skeleton crew this week

Thanks @MarkF for reverting. I’ll see if I can track down other examples to see how they’re showing up now post-revert. One example is never enough to validate properly

Hi @MarkF - a couple of additional merge samples that aren’t behaving the same way as the original issue reported above.

Maybe the fact that the nickname field was populated prior to the merge in the original example with NaLe0019_CCF (Max), is part of what’s causing the weirdness in that record’s name fields?

Hi, @ACWadmin1 !
Ok I went back and made some fixes again. This is what NaLe0019_CCF would look like with the newest fixes: 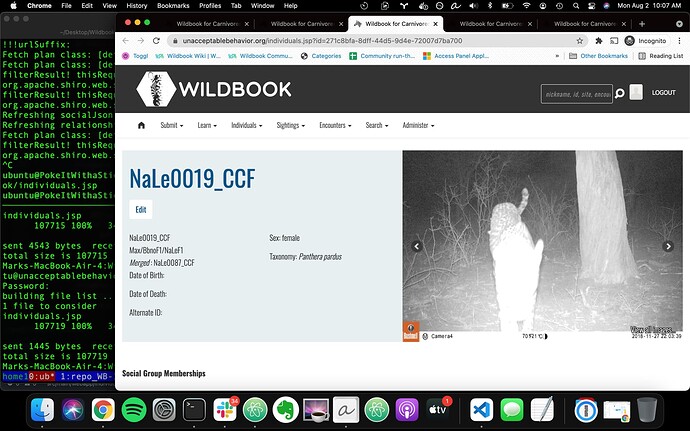 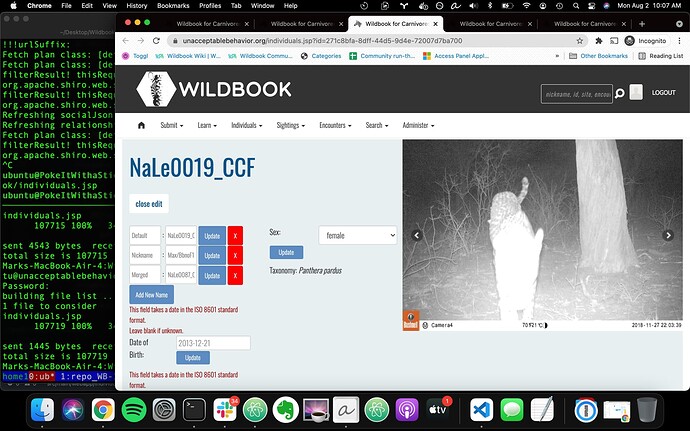 This is what CH00410 would look like with the newest fixes: 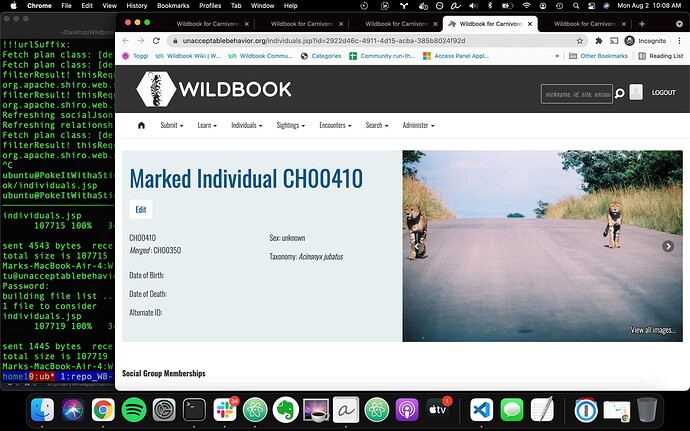 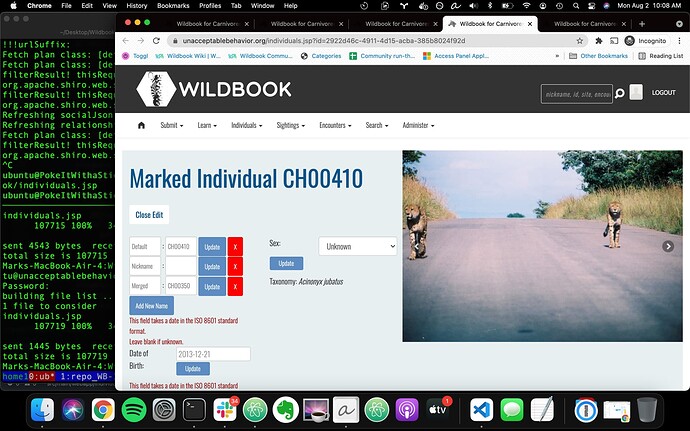 This is what CH00171 would look like with the newest fixes: 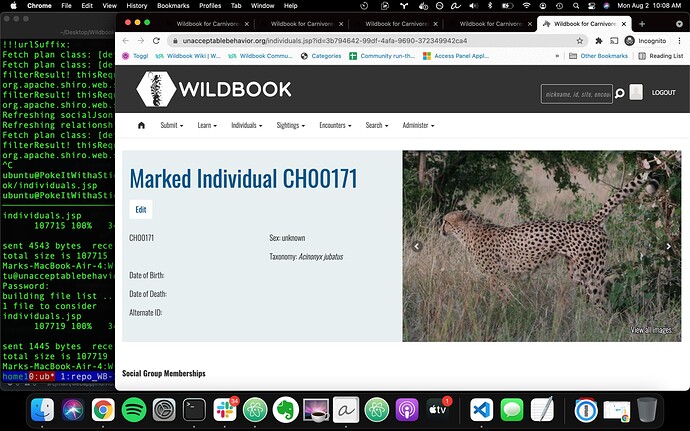 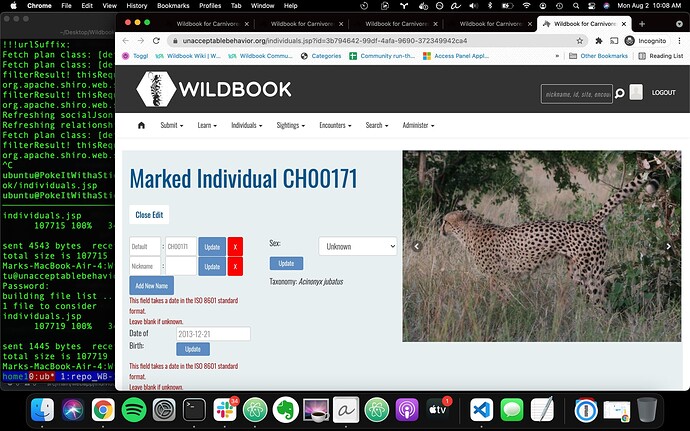 Is this more in line with what you are expecting/hoping for?
Thanks again!
-Mark

Oh, and this is what an individual with (two) merged project IDs would look like: 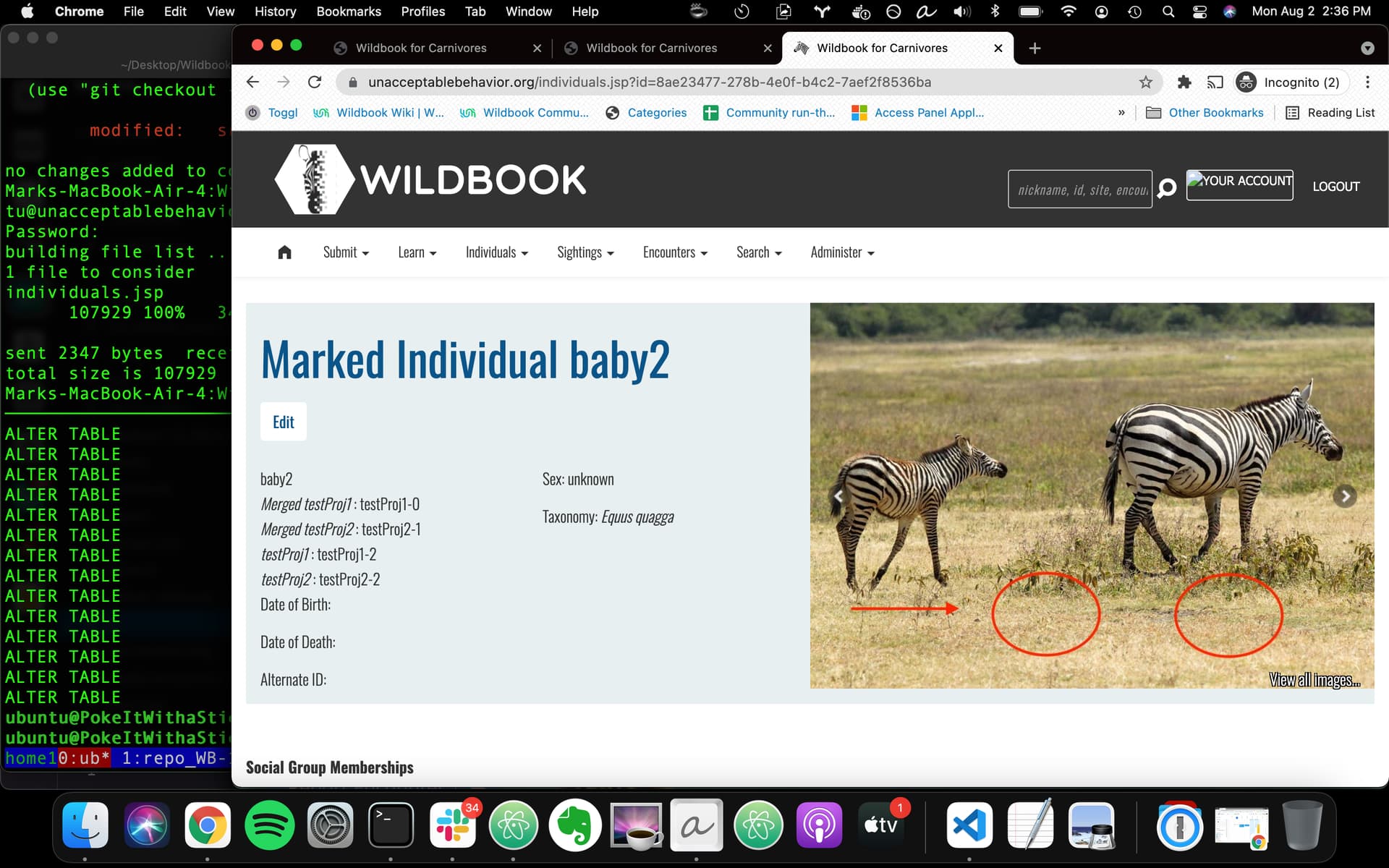 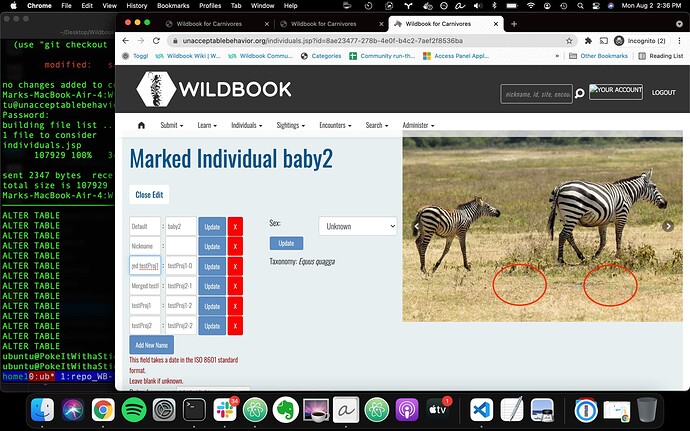 hi @MarkF - this all looks good to me, apart from the project ID example - we’re not using projects anymore because it doesn’t really work for us currently. We’re hoping for future improvements that will make it workable for our needs.

please go ahead and deploy the bug fix anytime - but after 2pm PT please, so our Africa-based users are sure to be offline.

@ACWadmin1 will do. Thank you!
-Mark