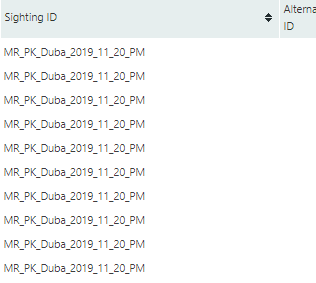 I don’t think this is related to the bulk import spreadsheet used to do the upload since the OccID is showing up in the search results, so I’m not sending the spreadsheet for now. Please let me know if you need it.

The sighting with this name exists in the system and contains 12 encounters:

Since the import was partially successful I will need to inspect the excel sheet to see any differences between rows that were assigned to the sighting and those that weren’t, or at least try to replicate this behavior.

Please send along the excel sheet when you have a chance. Thanks!

Hi @colin, I’ve forwarded the upload spreadsheet to the services@wildme email. thanks!

Thanks for providing that!

It appears that the 12 encounters associated with the import are the ones referenced in the excel file, and the ones you see not connected to the sighting are sibling encounters generated from images with multiple animals.

I have created issue ticket WB-1223 to find a solution. We don’t usually see this happen, it is a unique case to investigate.

I recommend adding the sighting ID manually to these in the encounter page ‘Identity’ menu since there are only a couple, and we will provide an update when this is fully diagnosed and resolved.

Hi @colin, I’ve actually been noticing quite a few examples of this as I’ve been going through our list of “Annotations Duplicated in Two or More Encounters”. I can dig up and send other examples later today if that helps.

Hi @colin
Here are some other examples - all say “cloneWithoutAnnotations” in the Audit trail section, which I assume means it’s an annotation that was generated from images with multiple animals?

@colin - I thought this example might also be a useful example - I found this while working through the “Annotations Duplicated in 2 or more encounters” list. The first encounter of the 2 duplicates (#1 below) has the correct Occurrence ID and the other (#2 below) has none assigned. Encounter #2 below also shows as “cloneWithoutAnnotations” in the audit trail.

Obviously, I’ll leave these duplicates in place in case you need them for investigation / diagnosis of the missing OccID issue.

Another of the same in the same duplicates list:

There is now a fix deployed that should remedy this behavior. I’ve tested the new code with truncated copies of your imports where the behavior was observed, and seen successful occurrence assignment in each one.

Please confirm that this the solves the problem for you with future imports or re-runs of these.

Hi @colin, glad to have a fix for future uploads, thanks. I have a few follow up questions:

But the import did not have 2 copies of the same file so it appears that the duplicate was created by the system (“cloneWithoutAnnotations”). Is this a separate bug?

Here’s some answers to your questions.

Thanks @colin for the detail.

The outstanding concern I have then is, how do I find all of the instances where this has happened?

Do you know when the problem started? We have thousands of encounters and hundreds of sightings in the system, most of which were uploaded in the past 3 months. Was the bug present from the start of our use of ACW? Or was it introduced in a later release? Knowing that would at least help me know where to start looking.

Also, does this only affect one species or is it across all species in ACW? If it’s all species then for at least one, deleting and re-importing isn’t an option due to the amount of matching work already done.

Lastly, re:#4 - I have many other examples in the duplicates list if you need more. I deleted a bunch of them already, before I noticed the pattern. Let me know if you want me to send additional examples.

First of all, for the encounters referenced in bullet point #4 there is now a fix deployed to prevent it happening again. This behavior would only be triggered when something was accidentally sent to detection twice. This was something that emerged on Oct 19 and was fixed today.

When I search for these sightings by name I only see the one sighting created by the import. Visiting that sighting shows a list of the entries on the import sheet, but not any cloned encounters generated by detection. If you have an example search result that shows otherwise you could link me so I can take a look.

The other behavior- cloned encounters not receiving the occurrence ID from the original encounter would effect all multi-animal images from an import where an occurrence ID is specified.

Since this original issue appears to have a broader effect than we thought we are evaluating a scripting solution.

Hi @colin,
Firstly, a script would be VERY welcome! I have no idea how we would otherwise ensure we’ve fixed all the instances and keeping all encounters from a sighting linked together is extremely important to us, not least because it helps capture both left and right profiles for individuals.
Next, we are aware of the issue where the Sighting record does not include cloned encounters and I believe Paul reported that bug awhile ago. So we don’t use the Sighting record to find all of the encounters in a sighting. Steps below are what we follow and how I found the OccID displaying in search results that link to encounters where the OccID is missing: 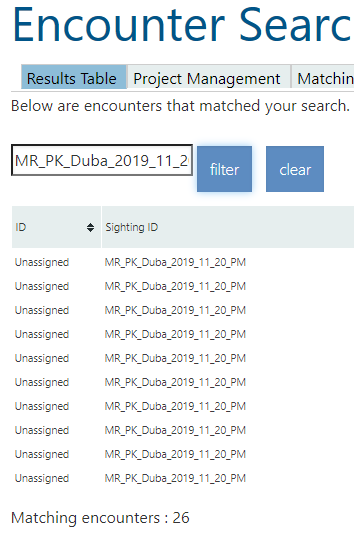 I’ve just run a script to add all the “sibling” encounters generated from detection to the occurrence referenced in the import sheet for an encounter and image. This should repair all instances
of this disconnect since detection on ACW was enabled. I’ve checked the encounters from your original post and several others and can see the additions to the sighting record.

This doesn’t effect the doubled encounters from #4 above, those hopefully are minimal since the bug was short lived and only occurred on when an import was sent to detection twice. There should be little effect on the system from these and they can be deleted when found.

Thanks, and happy new year!

Hi @colin, that’s terrific, thanks so much! It would have been a nightmare to try to find these and clean them up manually so you saved us a huge amount of work.

It’s unfortunate about the dupes not getting fixed; there are, I believe, about 200-300, based on what I’ve been finding in the duplicates list in the Data Integrity tool. But I’ve already fixed a few hundred of those anyway so I’ll just keep plowing through them.

Have a wonderful New Year’s and a vaccine-filled, healthy 2021 to us all!!!