What Wildbook should this feature be in? ACW

What would you like to see?
The ability to affiliate a researcher with multiple organizations. Often, researchers may be doing their project under a specific university but they source the images they need from another organization, via a data sharing agreement. So, for example, our first set of cheetah images uploaded to ACW actually belong to EWT but the researcher doing the analysis for her project is doing so as a student of TUT.

How would this functionality help you?
Allow us to display that the org that owns the images is different from the org of the researcher who has permission to upload and study them.

Hey there, thanks for posting!
I want to clarifiy before I get going. Data is never associated with an organization, just with the either the submitter or the managing researcher, as shown in this screenshot: 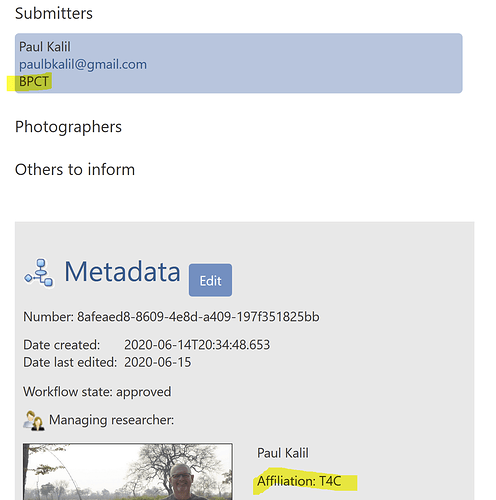 image1345×1354 239 KB
The submitter’s organization is displayed, and the managing researcher’s affiliation are displayed. In this case, they are the same person, but should the submitter and researcher be different, their respective organization/affiliation would display.

Currently, a user can be associated with multiple organizations, and can have one affiliation.

Based on this, I believe that you are able to show distinctions in data ownership? But I also think I’m not understanding something about the request. It’s definitely a nuanced interaction.

Thanks, and let me know if there’s more that I’m missing.

How is the submitter different from the managing researcher? What are the different fields to use?
And how is “research project” the same as an organizational affiliation?
Re: multiple affiliations - I don’t know how to get multiple organizations added to the “Org membership” list.
And we were told that it doesn’t do or mean anything at this time.

Submitter is the person who originally submits the data; this information does not have to align with a user in the system because of anonymous submissions. Managing researcher is the user the encounter has been assigned to. This must be someone in the system, and can be updated from the Metadata section under the encounter page.

“Research project” is not the same as “Affiliation”. These are two separate fields. See the second screenshot. These can also both be entered on an encounter submission.