In bulk import do the Encounter.locationID values and Encounter.lifeStage values need to be pre-uploaded into Zebra Wildbook, or can we continue to add our own values?

If they need to be done uploaded by Wildbook could we add Ol Jogi to the Encounter.locationID values? Additionally could we have breakdowns for Encounter.lifeStage of: Adult, 3yr, 2yr, Yearling, 6-12 months, 3-6 months, 1-3 months, and 0-1 months? Could we add an option to identify the dominant bush type and have the options be LB Acacia Drep, LB Mixed bush, and LB Euclea?

Hey @maggieliebich,
These are things that need to be added in on our end. We can add the new location value and and provide a new labelled keyword for you for the dominant bush type. The life stages you requested already exist and can be used.

For the new options, I will confirm here and once we get that confirmed, we will get them added as part of ticket WB-1350.

That all looks correct except for dominant bush type could you also add the bush types for Medium bush and thick bush. So the acceptable values would be:

What do LB, MB, and TB stand for? You already have a keyword for bush type (represented as Encounter.mediaAssetX.bush_type) what has the options:

And I don’t want to get to where we have duplicate keywords for the same thing.

LB is light bush, MB is medium bush, and TB is thick bush. I apologize, could we just add Acacia Drep, Mixed bush, and Euclea for dominant bush type?

I’m not sure I was clear. This is what you currently have: 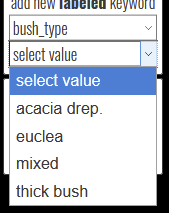 So, as far I can tell, you have the dominant bush type values that you need. If these values are correct, you can reference them in a bulk import using Encounter.mediaAssetX.bush_type.

So from what I can see here, I think there’s been a bit of miscommunication.
Right now, we already have a labelled key word for habitat obscurity with options light, medium, and thick (referring to bush, and abbreviated LB MB and TB on our field data sheets). What Rosemary then requested, is a further level of distinction between whether the dominant bush type is euclea, acacia drep, or mixed bush.
I don’t see why, if we already have a distinction made between light, medium, and thick, it needs to be reiterated as a prefix to the dominant type e.g. “LB Acacia Drep.” So that means we just need that additional dropdown to specify the dominant type, given that the obscurity is already established, with options Acacia Drep, Euclea, and Mixed bush.
Now, as Tanya correctly pointed out, a bush_type keyword already exists, and we definitely don’t need both bush_type and dominant_bush_type as separate, redundant entities. Given this, I think the thing to do here is just add Encounter.mediaAsset0.bush_type to the bulk import spreadsheet, as suggested, and not create a new field.
That being said, it would be helpful if “thick bush” could be removed from the options for the bush_type keyword, as I think the overlap in scope with habitat_obscurity could lead to some confusion.
Thanks also Tanya for adding Ol Jogi as a new location ID.

Sounds good to me.

This has been updated.