From just looking at it briefly it appears to be one snow leopard appearing and reappearing in front of the camera. However, looking at the tail we can see it is three different individuals. Perhaps a mother and juveniles, and since snow leopard cubs can be two-three years old and still with mom they are often large.

I had originally batch subset the data by hourly intervals, so there are several cases where there are multiple individuals/cubs in the same occurrence/encounter.

Hi @evebohnett ,
I moved this to a new topic because, while related to the old topic, it is a separate issue and this makes it easier to track the problems we have already resolved.
I will get this in front of someone for advice shortly.
Tanya

Hello, Eve!
This is on my radar now, and I’m looking into it! I will report back as soon as I learn more.
Thank you,
Mark

I also have several links that have multiple annotations and some of the annotations are wrong and need to be corrected. Here’s the entire list of all of the problems I’m having if you needed to see a few examples. It think going through one or two of these links you will see pretty quickly where there are errors.

Hi, Eve!
Here’s my response to the first half of your question: 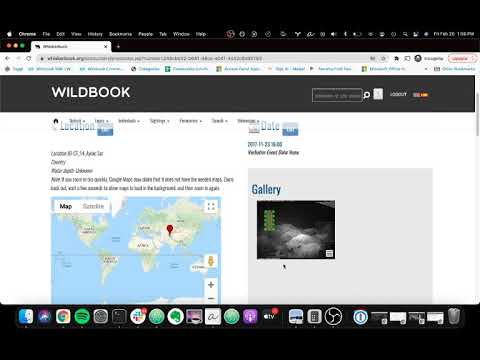 And here’s some supplementary documentation that might be helpful: Matching Process | Wild Me Docs

Does this answer the question you were asking?

I’ll follow up on the second half of your question asap.

Hi again, Eve!
Looking at some of your “multiple individuals in a single encounter” links, you could mean that one or both of two things are going on:

If you haven’t had a chance to peruse the Wild Me Docs yet, I’d definitely recommend it. I use it as a reference myself all of the time!

Wildbook is a web-based, multi-user software platform to help researchers collaboratively track individual animals in wildlife populations and estimate population sizes. Each Wildbook installation can be used by multiple researchers for multiple...

Incidentally, if you notice anything in that documentation that is not crystal clear, we would love to hear about it!I hope that this answers your question, but if i doesn’t, please don’t hesitate to seek further clarification!
-Mark

Great. Thanks so much Mark for answering my question. I do have one question that may work in the system. The occurrences that I have flagged as having multiple individuals are all annotated with the same green boxes as you mentioned above. There are seven of these occurrences. I’m curious if I delete the entire occurrence and then upload a new spreadsheet that breaks these up into 19 occurrences… would that also work? I know you mentioned deleting out the photos and creating new encounters, which I can do but it’s a bit more time consuming than uploading the new excel spreadsheet. I would also lose the ID info, but I can manage to fix that for these manually.

Hey Eve,
I think what you’re proposing would work, as long as you’re uploading them as separate Encounters, not Occurrences/Sightings. I believe that’s what you’re suggesting since you referenced bulk importing in that way, I just want to make sure since the terminology can get confusing.

Great that worked, I created several rows with the same Occurrence.occurrenceID which are now separate encounters. That way everything is separated but still retained the hourly occurrenceID Then I uploaded the photos again with the new spreadsheet. Everything uploaded just fine and I can edit the new encounters. However, I tried to delete out the old encounters and I could not find a way to do that, so I simply renamed them Deleted1…etc. I’m wondering if there is a way to delete an encounter? I managed to remove them from the Occurrence while renaming them. I found this doc in the documents for fully deleting. I think I need to read through the documents more to figure out how to use the API. Right now I don’t know how. Maybe after I’m done sorting and processing the data then I’ll take some time to figure this out. It’s not a huge issue.

You can delete an encounter from the Encounter page. Simply scroll down to the Metadata section and click Edit. You’ll see a Delete Encounter button at the bottom. Click the button and the confirmation and you should be able to delete the encounters. 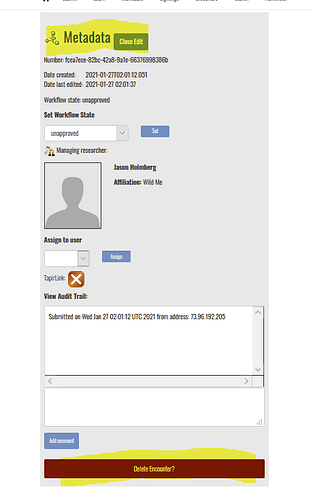 A post was split to a new topic: Manual annotation questions