What happened?
I tried to use the Encounter and Sighting Search functions by submitter ID, but that option isn’t available since the last system update (last Thursday, I believe). There was a fix applied to correct the species dropdown list, which looks great now, thank you.

However, the Submitter ID search field seems to have been replaced by the option to search by “assigned to” user ID. Note that the dropdown for the “assigned to” option is currently differently populated in the Encounter search vs the Sighting search (see screenshots below).

2 issues to report on this:

Bug?: it seems to only contain photographer names, not Submitters or “assigned to” users (although we don’t use this so a list of “assigned to” should actually be blank, I believe.

What we’re hoping for is for the previous Search by Submitter ID option to be restored.

I will try to look at this in the back half of the week.
-Mark

This is still using submitterID (i.e., “Assigned to” is the new “submitterID”. I’m not sure why the wording changed, but knowing Tanya, it was deliberate and well-justified): 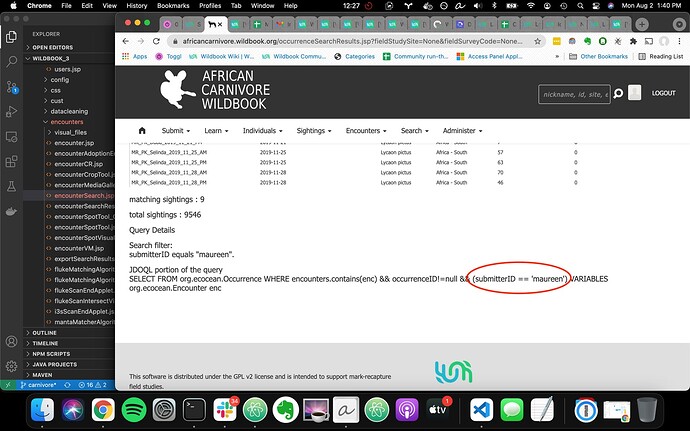 These accounts are actually the result of the user reconciliation effort; essentially, these are user accounts that did not have usernames (so, the accounts were likely generated when someone submitted a photo without logging in) and were not claimed during the 90-day “hey, consolidate your users” window. We need each user to have a unique username and a unique password before the codex migration, so this step simply assigned, “Anonymous_userID” as the username to any user account that had NO username in the first place.

If you’re curious, as an admin, I believe that you could find out whether any of these “Anonymous_userID” accounts are associated with particular email addresses in the “User Management” tab by simply searching for “Anonymous”. If you see any email addresses that you recognize, you could encourage those people to log in to their main account and claim that “Anonymous_userID” account by following these instructions. There’s still time for that for sure!

I don’t think either of these issues are bugs as much as changes with the update. Do you think this one’s ready to be marked as resolved?

So our workaround was to create fake email addresses for each of the photographers who submitted images directly to the researchers/conservationists but not through ACW. So we used our own url - @t4c.org, to create fake email addresses for all of the hundreds of photographers whose images are being used by our researcher/conservationist users. This is an issue we discussed extensively with Tanya and Jason H at the time.

They have never been deliberately (by us as ACW admins) set up as users of the system and never will be.

Fundamentally, the system doesn’t recognize that not all photographers are submitters and vice versa. We were hoping that codex would resolve this by unlinking the two but it sounds like it won’t?

How does it work for the Great Grevy Zebra census? Does every photographer get a user ID and password? If not, how do you credit the images to their owners/photographer?

We currently have 2 organizations working on ACW using citizen scientist collected imagery - hundreds of photographers for each event/census. These tourists are donating their images to that organization, not to ACW. These citizen science projects will be run fairly regularly so this will be an ongoing problem for us.

So, no I don’t think this is resolved but clearly not quite a bug. This is a use case that was not considered in the original design of submitter vs photographer that just got worse for ACW users because it now renders the submitter ID search filter virtually useless, especially as the # of photographers who are not submitters will only grow over time, starting in September 2021, when the next EWT census is scheduled to begin.

Anybody have any ideas?

Hi, @ACWadmin1 !
Ah. Ok.
I think an easy fix would be cosmetic… just exclude anything with “Anonymous_id” from appearing as candidates on those search lists.

The email addresses whatever@t4c.rog are still preserved for those “dummy” users; I just checked.

I’m not sure what was communicated in terms of codex, but I believe that it has always been the intention in codex to make each User have a unique username and email address. That certainly seems compatible with the needs of ACW; I just don’t know how they are planning on solving that issue (maybe photographer or submitter will no longer be tied to an actual User? I can only speculate), but point is there are multiple ways to… is “skin that cat” gauche in your particular community?

I do think that this would be an easy thing to fix custom on ACW Wildbook, since y’all have a good reason for not wanting those dummy users to be searchable.

Is there anything I’m not thinking of in terms of making a ticket to not populate search lists with users having submitterIDs beginning with “Anonymous_” for ACW? @tanyastere @jason … and @jon for the technical consideration.

It may be worth noting that there are several user accounts now with “Anonymous_” usernames who don’t have @t4c.org-based email addresses… But the vast, vast majority do.

Which might make me want to revise my strategy and instead hide users with *@t4c.org email addresses from the search-by-submitter dropdown lists…

As an addendum, I also noticed that that list does not sort to alphabetical order, which is something that should also be fixed and will enhance usability a ton.

Hi @MarkF - your ideas for an easy fix all sound good to me along with the added feature of the list being sorted alphabetically - that would be awesome too! Whatever’s easiest here to get those Anonymous_ user names out of the submitter ID dropdown box would be wonderful, thank you.

there are several user accounts now with “Anonymous_” usernames who don’t have @t4c.org-based email addresses

Btw, is there a way I could find the list of the “Anonymous_” usernames that don’t have @t4c.org email addresses? I’d like to take a look and see if there’s some cleanup I need to do.

@ACWadmin1 all I did was search from the user management tab for “Anonymous_”, and then use the sort feature of the table for the email column.
-M

Would it affect my “Researchers & volunteers” or “citizen scientists” stats on the home page?

Not a long term solution, obviously, but just a thought as an interim solution.

Hi, @ACWadmin1 !
Let me experiment on my dev machine and get back to you!
-Mark

Just to point out that Maureen and I have @t4C.org email addresses.

Hi, @PaulK and @ACWadmin1 !
After deliberating with @jon, I think that the best course of action is to hide Anonymous_uuid users from the searches but retain them in the database (i.e., just hide them from the user interface for searches). If we delete the users themselves, I fear we’d lose the information that links the encounters to the email addresses of their submitters/photographers.
Specifically, deleting a user does NOT delete the submitter ID from that user’s encounters. However, it can decouple the submitterID from an email address, because that connection is made in the User object rather than in the encounter…

We are planning on also doing this for all Wildbooks (including this line in case other Wildbook users submit a similar post).

The fix is being tracked internally as WB-1757.
Is this an ok resolution for you all?

Sounds like a good solution to me! Thanks to you and @jon. Much appreciated!

Thanks, this is better.

We will check all the rest showing up to confirm status.

@PaulK just following up here. I’m going to mark this as resolved now. Let me know if not, and I’ll undo it. Thanks!
-Mark

Hi @MarkF - yes you can consider this resolved! thanks very much for your help on this.